Abuse of software patents (what else are they good for?)

Check out the Wikipedia entry for Vistaprint (emphasis added):

The company recognizes that developing and protecting its intellectual property creates additional value in the company, and acts as a business moat to deter competitors. So far, Vistaprint has secured 15 issued patents and has applied for almost 40 more.

The company has described its objective as a "minefield of patents" and has been active in pursuing companies that it considers to be infringing on those patents."

If you think that's an unfairly exaggerated statement, check out the interview* with Wendy Cebula, then Executive Vice President and Chief Operating Officer (now President of the North American unit) of VistaPrint (emphasis added in italics):

VistaPrint has always placed a strong focus on getting patents. Which one or two would you classify to be the most important?
We really look at patents as a portfolio approach. As different competitors may choose to enter the market in different ways, our strategy is to create a minefield of patents that would be difficult for anyone to navigate. That being said, our patents around our studio design technology, which is one of the ones we are defending right now in the public, and in our back-end aggregation and our bridge are two that have been issued and that are public that we believe that are very important to us. There are others pending that, clearly, we are excited about as well.

* Note that the interview was taken down - I had to find it in the Internet Archive snapshot from 2008. Interesting...
Posted by Oisín at 2:23 pm No comments:

Irish casual racism: an exchange of vitriol on Youtube

After watching a very disturbing Youtube video trying to make the point that our good Irish culture (and presumably, skin colour) are being diluted, I felt the need to respond to some of the worst comments, particularly those that seemed to assume that all immigrants are gaming the system and/or getting "free housing", benefits and other such nonsense.

nomorefreebees 3 days ago
great video ,,, so we now have foriegn irishmen do we? i dont think so,
the foriegners are here for only one reason and thats to make ireland their land,,,,,while our stupit government gives them all the benifits available and deprives its own people ,, hospitals closing down to keep immigrants ,,, benifits﻿ cut to keep immigrants...... and all the while we say nothing ....... so are we going to act now or do we want to let immigrants take us over like they almost have now in sweeden ...

I was saddened to see that a greater number of commenters seemed to agree with these misinformed racists. But then entertained by a quite ludicrous private message sent to me by one of them:

From: nomorefreebees Subject: fool Date: Jul 19, 2010
You have some cheek to dictate to Irish people haven't you? You didn't even know where this country was a few years ago.
You hand out allot of meaningless advice about a dole office. I have a business and I don't know what the inside a dole office looks like but obviously you do. Furthermore many so called immigrants are illegal and work as well as collect benefits. The evidence is on my channel if you care look at my videos. But you won't will you? Because you don't want to know do you? Or should I say you already do.
If all immigrants are working as you claim then why is it costing the Irish people 90 million a year to keep immigrants in Mosney Co. Meath? Plus another 190 million to keep the rest of them in free housing, benefits all over the rest of our country,
I have my facts right so get your facts right before you comment on my channel.
Letting on your little Mr. Innocent and trying to let people think you're the oppressed while all the while you're bleeding our country dry,

It hasn't moved much in the last few million years. Also, could you start out by not spouting such clearly useless drivel as this? A few years ago, I was right here in Dublin, so I know exactly where we were.

"If all immigrants are working as you claim then why is it costing the Irish people 90 million a year to keep immigrants in Mosney Co. Meath? Plus another 190 million to keep the rest of them in free housing, benefits all over the rest of our country,"

Excuse me? Where did I claim that "all immigrants are working"? I certainly said no such thing and by trying to build such a flimsy strawman argument you have instantly reduced your credibility to ZERO.

Furthermore, the "immigrants" in Meath and "the rest of them" with free housing are a tiny minority of the immigrants in Ireland.

Your argument is like saying that humans shouldn't be allowed to live here because we spend millions to operate prisons and hand out dole to scangers who never work a day in the life.

The people who unfairly game the system are the VAST MINORITY.

Unfortunately, racist idiots like you appear to be growing in number.

Is it just that Youtube brings out the worst assholes (like him and well... me) or is this really how a majority of Irish people feel now? Because it's pretty damn sad.

This is a small country and you claimed 90% of immigrants were working thats not true how could it be when its costing our goverment or should i say the tax payer 90 million a year to keep immigrants in mosney not counting their benifit money. And how about all the others? there costing us another 200 million a year , they have free housing, benifits, free bus passes , and the rest.
your only kidding yourself not me, like i said i have the facts i dont speculate. wheres your facts? tell me it doesnt cost us that money will you?

"your only kidding yourself not me, like i said i have the facts i dont speculate. wheres your facts? tell me it doesnt cost us that money will you?"

You do not have all the facts. If you had the facts you would not say something like "that's not true, how could it be if the tax payer is paying 90 million a year to keep immigrants in Mosney"? That is you taking a fact (90 million a year "to keep immigrants in Mosney") and jumping to an unsupported conclusion (at least 10% of immigrants are spongers).
You can't just take a fact and suggest that it supports any claim. THAT is speculation, and it's what you are doing.

I note that you're trying to build another strawman argument: "tell me it doesnt cost us that money will you?". Do you not see how silly this is? I never said that it doesn't cost us money. Of course it does. My point is that it's a small number of immigrants/refugees that cost us the money. Not only that, but the vast majority of immigrants (there are more immigrants than just refugees) HAVE to work to be here, and they pay tax like every other worker. So the legitimate immigrants are also funding the spongers.

You talk as if the majority of immigrants have free housing, free bus passes etc. That is not true and you do yourself a disservice to suggest so.

The output from Sorensen seemed okay when played locally, but the DVDs produced by DVD Flick had audio slightly earlier than video. After a long time searching, we stumbled upon a forum post where a guy (thank you, "dng"!) in a similar situation had resolved the problem in DVD Flick by going to Edit title... -> Audio track -> Edit -> Ignore audio delay. This worked perfectly for us, and showed that the audio delay in the MPEG from Sorensen was -160ms or so, which explains why the audio was slightly ahead of the video. Perhaps the media players we used (Quicktime and Windows Media Player) ignored this metadata which was why it seemed fine until burned as a DVD-video?
Posted by Oisín at 11:49 pm No comments:

Trying to get away from the somewhat processor-intensive Flash for watching videos on the web, I just tried out the new codecs for HTML5 on Youtube in three browsers, getting the following rough reading for CPU usage (in the "top" utility):

For comparison, the "old" Flash player was taking ~50% CPU.

It seems that both Opera and Firefox are using the VP8 codec for video, which is currently not hardware accelerated (at least on OS X, due to Apple not standardising some API for GPU use). Safari is using the H.264 codec which clearly performs much better on this machine, but which is patent and licence encumbered.

So at this point, VP8/WebM is completely unusable for watching video on slowish machines like mine (a 3 year old Intel Macbook). Here's hoping that VP8 can take advantage of better hardware rendering soon...

* Minor addendum: Looking at this analysis of VP8, perhaps the encoder/decoder implementations are just immature at the moment and need to be optimised in a few areas. However, there are also some mentions of disturbing (in terms of possible future patent issues) similarities between the VP8 and H.264 designs.
Posted by Oisín at 1:25 am No comments:

Following up on a previous post, a Windows build of Blinkenwords is now available here. I used a very impressive program called OCRA to automatically bundle the Ruby interpreter and required libraries into a single 4 megabyte (not enormous) packed executable.
Posted by Oisín at 10:31 pm No comments:

Been fighting off a slight backlog of flashcards in Anki, pretty much due to downloading two French card decks as a refresher before heading to a conference in France next month.

After about 25 minutes going through some of the French cards, I had to leave them and pay some attention to the Chinese deck I've been building for a couple of years now. The cards are about 25% single characters (production), 40% multiple-character words (recognition) and 35% sentences (recognition), after switching sometime in December/January from production-only words/characters to make things more practical.

For some reason, it went really well today and I was on a roll, correctly answering some 83 cards in a row. No new cards, but a few recently-added ones which weren't completely familiar. Usually I'm happy to get 80-90% right, depending on tiredness.

It seems most efficient (at least if you occasionally create backlogs by not reviewing all of the cards on the day they're due) to review cards in order of their interval (i.e. if I don't finish all my cards today, at least I'll have dealt with the ones that were most in need of revising - seeing a 1 month card two weeks late is better than seeing an 8 day card four days late), so quit while I was ahead when asked to write the character for ginger (with an interval of around 2 months)*. 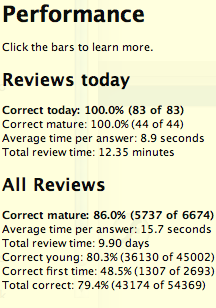 
* I've been told that I should use less parenthesised clauses when writing. Makes sense... Actually thinking about it now, if I extracted the bits in parentheses from that sentence into footnotes, and then saw how silly the result looked, it might make refactoring the text more obvious. On the other hand, it's 2am and I'm supposed to have a meeting at 9:30am :/
Posted by Oisín at 1:39 am No comments: