Ultima IX was one of the ultimate letdowns in the history of game sequels. Pretty much all of the previous games improved as the franchise continued, with the arguable exception of 8 (but Ultima 7 "The Black Gate" and 7 part 2 "Serpent Isle" were superb and very hard to follow). Ultima 9 took the leap into a properly 3D, third-person adventure, with a very clever physics engine and pretty graphics.
Sadly, it was released as a buggy, unconvincing game, with unsatisfying combat, awful AI, a fairly linear plot and an unimmersive environment - especially compared to the Black Gate where you could bake bread, sew thread into cloth and cut cloth into bandages, deliver pumpkins and meat and really interact with an enormous number of objects, as well as watch NPCs carry out believable tasks on a real schedule.

Perhaps the most enjoyable thing about Ultima 9 was the ability to build ridiculous, gigantic bridges out of sticks balanced atop scrolls lying on bottles balanced on loaves of bread, and jumping along the bridge in stages to cross the unswimmable sea between islands (!!).
Posted by Oisín at 2:38 am No comments:

Rough meaning: The story of Huan Jin Wen of the Qi dynasty

Back when I used to use Windows 98 and then XP primarily, the phenomenon of having to reboot when carrying out a minor system change or installing an inconsequential update caused much exasperation, something which was far less of a problem on Ubuntu.

Then I moved to the Mac and was again disturbed by the occasional mysterious requirement to restart the machine merely because the web browser or worse, iTunes (which I do not even use) had updated itself.

And then I got a Windows Vista box and was reminded of the good old days: 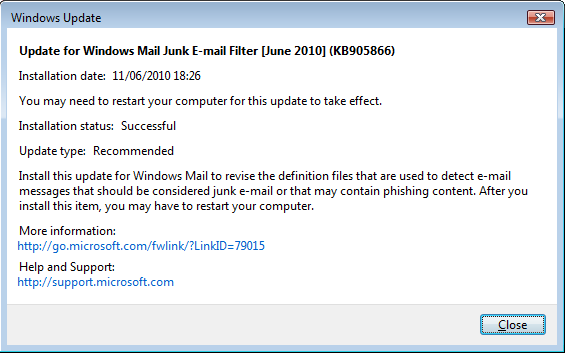 Nice. I've never used Windows Mail, but now it wants to reboot the computer just because it's updating its own files? Piss awf!
Posted by Oisín at 2:59 pm No comments: