Uploaded a small utility called Blinkenwords on RubyForge. It's a simplistic RSVP (rapid serial visual presentation) program which takes input from the clipboard (shortcut: up arrow key) and displays it (shortcut: down arrow key) in vertical chunks. You can change the number of words in each block (from 1-10 at a time) and change the speed in words per minute (shortcuts: -5 wpm => [, +5 wpm => ]).

There's lots of similar programs out there, some implemented as Javascript programs - I only wrote this because none of the ones I tried rendered text as I wanted to see it (i.e. reading in vertical columns, 3 words per column, but not scrolling a 3-line textbox one line at a time). It has a couple of very basic heuristics which insert a slight pause when a group of long words or end of sentence/clause is detected. Also, I took the opportunity to add easy keyboard shortcuts to streamline things (i.e. copy some text, switch to Blinkenwords, press up key (paste), press down key (play text), left/right keys (skip backwards or forwards)).

Whether reading this way helps or hinders speed and comprehension is questionable (see this blog post I wrote a while back on the topic of speed reading), so this is pretty experimental and YMMV (if you can even get it working - had some troubles with source file encodings and a couple of other things). Personally, I find it useful when there's lots of drudgery-reading to be done (e.g. catching up on forums/lengthy emails/news articles), but have problems with difficult, dense texts. 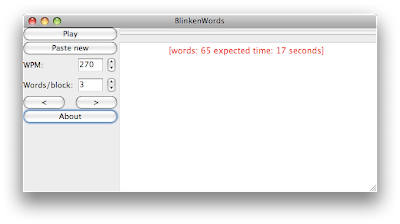 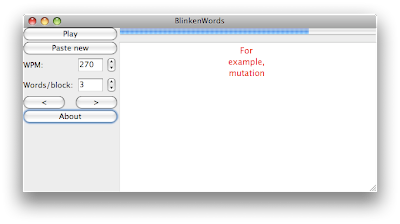 Update: You can download a Windows build of Blinkenwords is here. I used a very impressive program called OCRA to automatically bundle the Ruby interpreter and required libraries into a single 4mb(not enormous) packed executable.
Posted by Oisín at 11:36 pm No comments:

Spent about 20 minutes wondering why Plink (part of the free PuTTY SSH suite) was acting extremely oddly on my machine - not displaying help when run with no arguments, and completely ignoring PuTTY saved session configurations, and generally not working at all.

On the off-chance, I downloaded the snapshot release of Plink (from the same page) and it worked straight away. Argh! A completely useless buggy version has been the official release since 2007?!
Posted by Oisín at 7:30 pm No comments:

Picked up a Polaroid TLU-02241W LCD flatscreen TV cheapish on eBay a year or so ago, intending to set it up for use with my Atari STe, which didn't happen until today (and is still pretty crappy with the horrendously low quality RF cable - will need to pick up a special 13-or-something pin DIN to SCART cable).
When I received the TV I did a quick test and it seemed fine, but turning it on this time only displayed the Polaroid logo on boot and then the display seemed to power itself off, even though the blue LED showed that it was still "on". Also, it seemed to pick up some analogue broadcast via the RF cable and produced a good sound output.

A quick Google indicated that this model (and many other Polaroid TVs) has serious problems, particularly relating to bad quality electrolytic capacitors in the power/control boards. While watching a series of videos on Youtube showing how to identify and replace the dodgy caps, I went back in and booted the TV again, this time repeatedly hitting the menu button on the remote. Surprisingly, it went from the logo to a blue screen with a working OSD. Problem solved, even after turning the TV off and on without the same button mashing.

Sounds like it will eventually fail, with all the bad reviews, but for now it seems ok. If you're seeing the same symptoms, see if this works.

Update: Problem not solved - came back again the next day and no amount of button mashing will help it. Also, tilting the screen backwards or forwards causes the power LED to flicker and go dim, which is disturbing. Looks like it's a painful capacitor replacement job which is somewhat likely to fail anyway if it turns out to be another problem.

Poor show, Polaroid!
Posted by Oisín at 10:04 pm No comments:

*voicemail icon flashes, we check the mailbox*
Same caller: "Hi Danny, this is Anne-Marie here at Classic Cuts, just checking if 1pm on Wednesday is ok with you. Bye!"

Why would someone dial the same number twice and, after being told twice that they've got the wrong number, dial AGAIN and leave a voicemail for "Danny", even though the voicemail greeting clearly identifies as someone other than Danny?
What could possibly explain simultaneously having the ability to dial phone numbers and speak English, while being unable to comprehend the most obvious facts? If you call a number TWICE and are told that it's a wrong number, it's STILL going to be the wrong number the third time.

Top Tip: No amount of redialling the same wrong number will cause Danny to answer the phone.
Posted by Oisín at 6:44 pm No comments:

After my bike was robbed [smiley face indicating that I'm loudly shouting "cunt!"] in November or so, I figured I'd experiment with alternative forms of transport, hoping to find something more casual and less stealable (i.e. something I don't leave outside my house only locked to itself might be appropriate).

Doing a bit of looking around online, I was intrigued by so-called "Freeline" skates (Wikipedia article appears a bit anaemic), which are very much like the old snakeboard, albeit without the connecting bar between the two plates. To propel yourself forward, rather than kicking off the floor like with skateboards and inline skates, you use your hips, legs, shoulders, arms and whatever you can to swing your body weight around and turn your feet so the skates follow a kind of S-curve.
It's called "non-holonomic motion" and I found it very difficult to understand via textual descriptions which were far superior to this one, so basically you just have to try it until you get the knack, which took me quite a while on the Freelines.
So I picked up a pair on eBay around Christmas (very expensive too, ended up around €110 delivered from the UK). 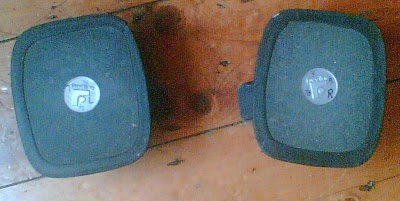 1. Standing on the skates without doing the splits. As you stand on the skates, the axis of movement is just off horizontal so the skates want to slide out to your left and right and you accidentally do Jean-Claude Van Damme sidesplits. Most people, including myself, can't really do that without our legs falling off and exploding, so you quickly learn to control the relative position of the skates with your inner thigh muscles.

2. Rolling across the room with losing your balance. This is presumably the same with any kind of skates/skateboard, but exacerbated by the fact that these behave in a slightly more unexpected way due to the wheels being angled slightly differently: there is a distinct left skate and right skate, so when they're side by side the wheels make a shallow V-shape. Getting used to this means rolling back and forth on flat ground by a railing or low wall so you can pull/push yourself and keep steady with your arms, until eventually you can coast a few metres unaided. Or get a friend to hold one hand and walk back and forth, but that's limited by their patience since it can take a long time.

3. Launching from stop without pushing against a wall. It's difficult to even stand still on the skates - a little bit like on a bicycle. Sometimes you see bicycle couriers with gearless bikes and no freewheeling clutch, stopped at a traffic light (yes, many bicycle couriers actually stop at lights :D) and very slowly inching forwards and backwards on the spot rather than putting their foot down. You can do a similar trick with these by angling your feet into a T-shape, but it takes practice, and actually pushing off from that position to get moving is even more difficult (I tried it about ten times and succeeded once, and awkwardly at that).

Normally, to push off moving from right to left, you put both skates in front of you, then knock the right skate over away from you and step onto it so your toes are also touching the floor. Then you put your weight on those toes and place your left foot on its skate, and push in that direction (without extending too far or your right foot will fall off the skate), pulling the right skate upright with your foot as some of your weight moves onto the left skate.

4. Propelling yourself! After all the other challenges, this one is pretty easy, to begin with anyway. Your feet will probably start to do this automatically in step 2, when you're just trying to roll without falling. Essentially, as one foot is moving in an upwards curve, pushing it forward will increase your speed, and similarly when it's on downwards curve.

Well, I only got them to replace my bike, so all the tricks people do with them (mostly pirouettes, riding on one foot and dropping/stomping the second skate, switching etc) are not really relevant. If I ever get supremely good at riding the things, maybe I'll experiment a bit.

Mostly, I want to find out if I can travel any kind of significant distance on them, somewhere between walking and cycling speed. A measly 8km/h for 4km (the distance between my house and DCU) would suit me just fine, but so far I have to stop riding after about 1km (about 10 minutes) because I get pains in the following places: the middle of the soles of my feet, my calf muscles, my instep. By then my thighs basically just run out of energy and I start moving more and more slowly and my form gets sloppy.

I don't know if this is poor general fitness (I'm a lazy, lazy man who likes sitting on his arse with a laptop or playing PS2 for hours on end), or specific muscle conditioning that needs to happen for everyone, or if I'm literally physically incapable of adapting to the skates for longer periods, or even if the skates are just not suited for that kind of travel, especially over the crap, laughable pavement conditions we have here in Dublin (stupid 1 inch deep, 3 inch wide drainage channels between every few houses, cracks and bumps everywhere, corrugated concrete driveways which make skates trundle and vibrate like a broken shopping cart).

That said, if you're going at a reasonable speed you can get over small cracks and drains by leaning slightly onto your back foot - that way the front skate can bounce past the obstacle and even if it gets caught and stops dead, you just hop off since they're not tied to your feet. If your front skate gets caught and most of your weight is on that foot, your balance can be thrown off badly.
And I've seen a couple of videos on Youtube which suggest that people can and do cover more significant distances on them - about 34km in this one.

One recent change that's working much better for me is focusing more on my back foot to push myself forward, rather than trying to drag myself with the front foot which causes it to slip out of position and seems to tire me out. Maybe it's just more efficient for the way I happen to distribute my weight on the skates. Who knows. Even if it turns out to be a complete failure, it'll be a fun failure!
Posted by Oisín at 5:33 pm 8 comments:

(trying to reassure scared 2-year old daughter at 3am)

Me: Ok, if there's a monster there, just give it a kick.
Aela: How 'bout YOU kick monster.
Posted by Oisín at 3:28 am No comments:

Saw this today and had to save it... classic lowbrow humour, Dublin-style! 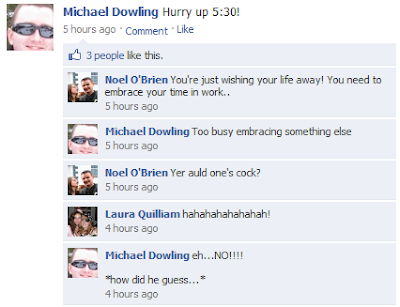