Replacing the electromagnetic clutch brushes on a Micra CVT

Soon after buying my first automatic transmission car, a ten year old Nissan Micra (K11) with the CVT gearbox, I found that the carbon brushes which supply power to the electromagnetic clutch tend to wear down.

The clutch operates (as far as my limited understanding goes) by passing a current through some kind of magnetic powder (maybe just iron filings? Anyone know what this is?) which fills the gap between the driving (engine-side) and driven (gearbox/wheels side) plates. When the engine is at idle, no (or very little) current is passed through the powder so the engine spins without transferring force to the driven side.

As you hit the throttle and engine speed increases, the current passed through the powder is raised and the powder becomes magnetised, sticking together more strongly and transferring more of the rotational force from the engine to the wheels.

The electrical current is supplied by a pair of carbon brushes which rest against turning discs (I think they're called slip rings, which just slot onto a splined axle), since you can't just stick a wire into something that's constantly spinning. After a while, both the brushes and the slip rings start to wear down - hopefully the brushes more and the rings less, since the brushes are easy to replace while the slip rings are probably almost impossible (i.e. cheaper to buy a new car than to get the clutch out, open it up, replace a part, put it back together and re-install it in the car, argh). When the brushes wear down, springs in the brush holder push them further out until a certain limit, they either lose contact completely or periodically slip out of contact briefly, triggering the "N-CVT" warning light on the dashboard. As they wear out of reach of the clutch wheel/slip disc arcing can occur which is apparently a bad thing, too.

So anyway, my Micra had started to get sluggish, needing more revs than before, and I figured it might be the clutch brushes. I checked the web for similar problems and solutions and found a LOT of problems and NO solution other than buy a new brush holder/new gearbox/new car.

Nissan refused to talk to me on the phone, telling me to call local dealers instead. Two separate dealers quoted me a laughable €218 for the whole brush holder assembly, which is apparently all they will give you short of an entire new clutch (again, more than the cost of the car).

This seemed a lot of money when it was just the carbon brushes which had worn down. So I took the brush holder assembly out anyway.

Where is it? Here, on the front of the transmission bell housing:
(edit, new pic to help locate it) 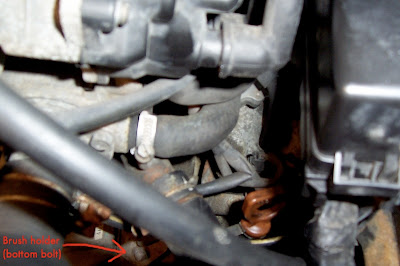 You can disconnect the power plug by pressing a tab on the left side of the upper half and pulling it upwards. Blurry closeup of power socket: 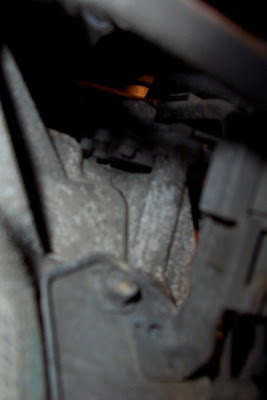 The hole down into the clutch after removing the brush holder. Looks... not so great: 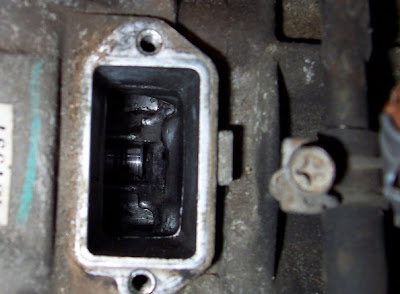 And the brush holder after removal: 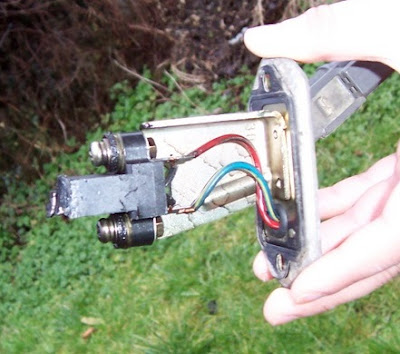 Knackered. Right down to a stub on the engine-side brush and while not so bad on the driven side, the spring was jammed up with cruddy carbon deposits and failing to push the brush out to maintain contact with the slip ring.

So I disassembled and cleaned it (on the left is another brush from a mk3 Ford Fiesta's broken alternator... similar!): 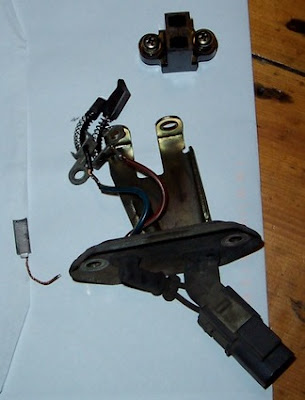 The brushes looked so similar to what you'd find in an alternator, serving the same purpose anyway, that I went to a shop ("Electro Maintenance" in Baldoyle) to find something suitable. A guy came out of the back room and took the disassembled holder away before coming back with some Delco alternator brushes, for which he charged a pretty reasonable €7. He also suggested that I snip off the old brushes, leaving just the bit of wire that was somehow attached to the metal mount, and then solder the copper wire of the new brush on top of that. Before doing this, we threaded the old black plastic insulation piece onto the wire, fed the spring through and cut off the excess wire (to stop the brush from falling out the end of the holder!). 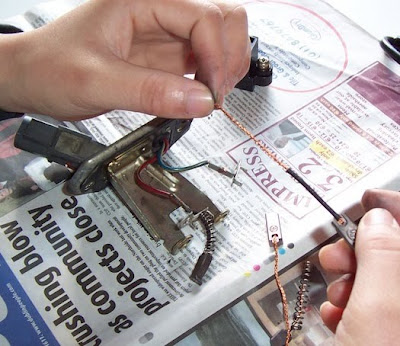 Soldering the new wire onto the bit of old wire (no idea how the old wire is attached to the metal so nicely but still conducting current): 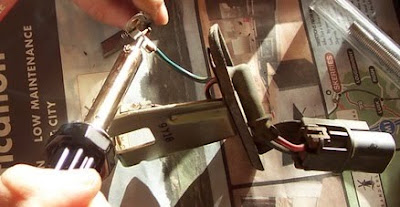 And reassembled after soldering: 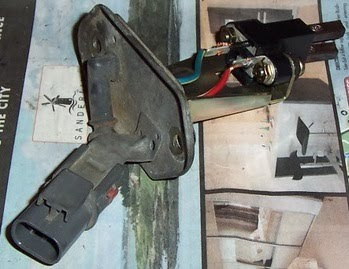 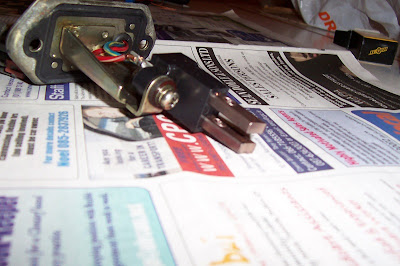 Note the slight slant in the brush faces where they contact the clutch wheel/slip rings - the longer edge is on the bottom and the shorter edge on the top (where the power socket is pointing). This is what the wear pattern in the old brushes looked like, so I oriented the new ones in the same way (if I'd bought brushes without a slanted edge, I might have used sandpaper or emery cloth to file one in, since it probably helps them fit into the clutch properly).

Also, if you have a multimeter, check the continuity from pin to brush for both pairs. Each pin should form a circuit to the brush on the same side.

After installing the brush holder (much easier than removing it, bizarrely - it took about 5 minutes of gently sliding it around and twisting to get it out, after removing the battery and its tray* and moving a relay box out of the way), I sat in the car and gingerly started the engine. It fired up, and I listened for any horrible scraping noises and watched the N-CVT lamp on the dashboard, which didn't light up. Knocked off the engine and did a self-test of the gearbox (put it in D, ignition on but don't start engine, brake on, accelerator on, cycle Ds-D-N-R-P, accelerator off, brake off, start engine) which reported okayness (N-CVT indicator flashes one long, then seven short and repeats).

* Note: I recently checked the brushes again and was able to get the holder out without removing the battery or its tray. If you have the right screwdriver or a ratchet with screwdriver bit, you can get it out in less than 10 mins! I did have to lie under the car and ask my SO to hold the ratchet end in place though.

I carefully reversed and turned from the cramped shed into the cramped laneway and drove home. Feels a bit more responsive so far but I was literally a 2 minute drive from my house so no chance to get it up to speed.

Hopefully the fix is ok and won't trash the clutch or wear down within 2 weeks - time will tell. (It'd be pretty funny if it completely failed within a couple of days :/)

Replacement from Nissan: €218
DIY hack job with alternator brushes: €7 + time (one hour if you're smart, 4 hours messing about if you're me).

Hope this helps anyone in the same boat!

...Until I stupidly drove through at least a foot of water in a flood on Monday (yeah, who'd have thought it might rain in Ireland). This seemed to short out the coil and some kind of safety interlock started switching it off despite my repeated attempts to stop and restart it. Eventually after an hour or so hanging around near where I'd parked the dying car, it managed to get going again, albeit warning me that the clutch's coil circuit was shorting (IIRC, the fourth flash during the self-test mentioned above).

If I'm lucky, either the brushes have simply worn down, or a bit of trapped water is occasionally making a short in the connector. If not, water may have leaked into the clutch and contaminated the powder or something, I don't know. That hole is near the bottom of the engine, so for all I know the bell housing has a pool of water in it, bathing the clutch and promising rust or some other disaster.
I wonder if it's the same type of clutch used in the older Subaru Justy - it looks like they can lose their powder, which would not be good.

30/10/2011
Finally got round to removing it, which just took a couple of minutes this time - amazing how much easier some jobs are in direct sunlight rather than in a dark garage. Last time I removed the battery and its tray and pulled a bunch of stuff out of the way, needlessly.

Turned out the brushes were hardly worn at all, but they were very wet. When I replaced them last year, the generic alternator brushes may have been slightly too long for the available space, and I was afraid to break something so didn't tighten the brush holder's bolts nearly enough, leaving a gap large enough for water to pour in as I foolishly rammed the car through floodwater.
Might be a good idea to file down the brushes a tad before installing them, enough to push the brush holder absolutely flush in its socket and screw it in tight enough to prevent water entering the clutch housing.
Posted by Oisín at 12:19 am